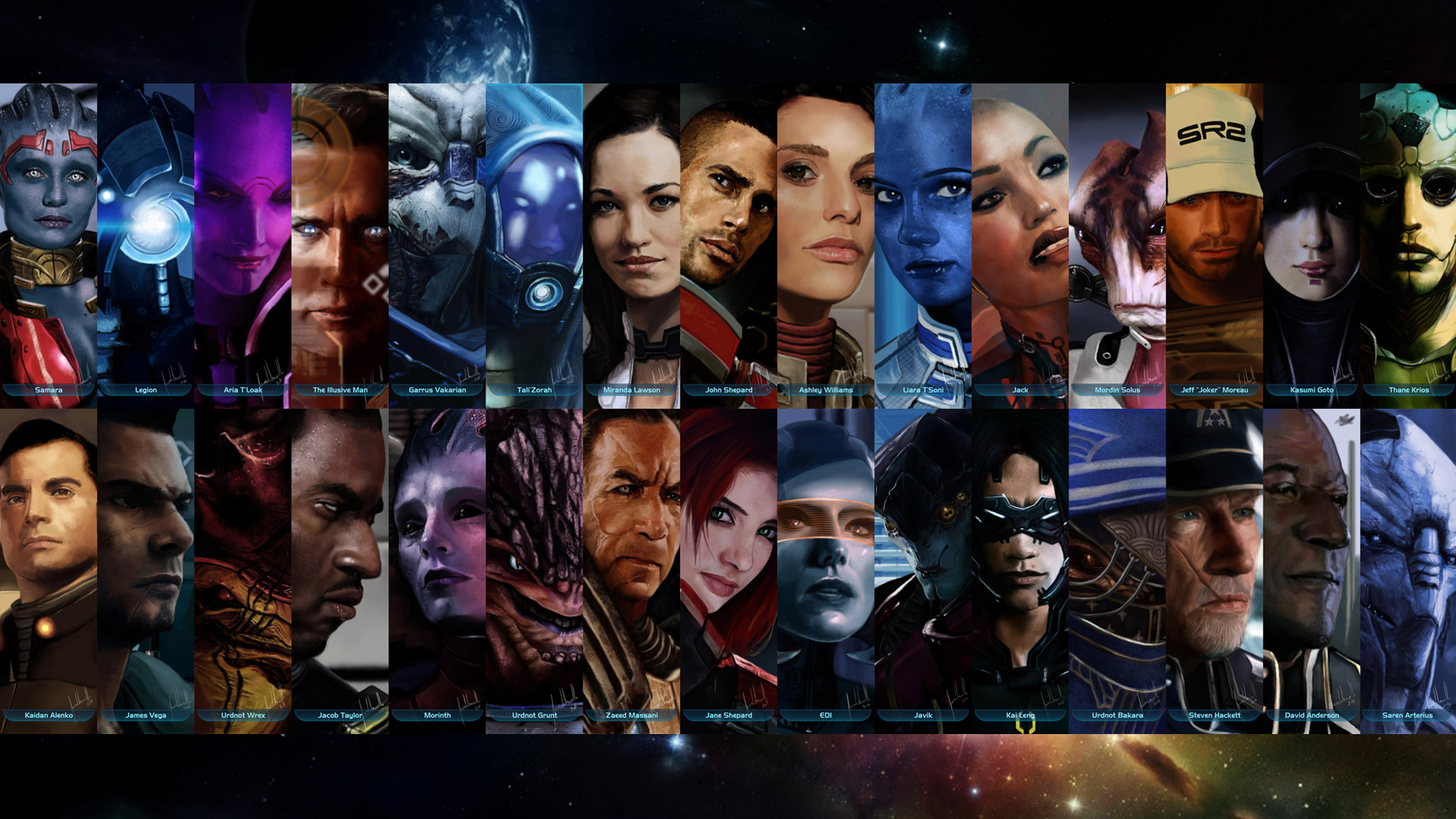 To avoid this turning into a useless gush about how incredible these games are I’m going to separate this article into different sections. Anyway here goes.

This is arguably the best thing about the Mass Effect games. By the end of Mass Effect 3 I felt like I knew every member of my squad. I knew their personality, their likes and dislikes, their sense of humour, what they’d done in their life. They’d actually become my friends. Too many games are action driven or plot driven. The Mass Effect games are character driven. And that’s why I care about the plot. I care because I don’t want these people to die.

Throughout the series the Commander Shepard that you’ve created will develop relationships of various kinds with other characters in the game depending on who you, the player, like and don’t like. By the end of the series you’ll be laughing and crying along with Commander Shepard and her gang (I’m going to refer to Shepard as female for the purposes of this review to save using non-gender specific pronouns), you’ll be able to predict what the characters will say in certain situations and you’ll care if they live or if they die. You can have interesting and deep conversations with all of your squad and they all feel like real people. An example of one such conversation is this one you have with Liara T’Soni about the place she grew up and also about her mother, who died in Mass Effect 1.

Another example of the genuine friendships you have with your crew is this wonderful piece of bonding between Shepard and Garrus Vakarian.

It isn’t just the relationships between Shepard and her squad that are brilliantly executed however. The relationships between your squad are deeper and more complex than most romance subplots in modern day blockbusters. Then again that’s not saying much! For example the argument between Liara and Javik, the last surviving Prothean (a now extinct race which Liara spent most of her life researching), after her home has just been annihilated by the Reapers engages the player because everyone can relate to having someone you idolise (in this case the Protheans) turn out not to be anywhere near as nice as you expected.

The Mass Effect series also does a wonderful job of giving AIs and synthetic life forms personalities and making them feel like individuals with their own thoughts and feelings. EDI, the Normandy’s AI, grows hugely as a character throughout Mass Effect 2 and 3. She develops feelings and opinions and in Mass Effect 3 she says, “socialising with the crew prevents [her] from feeling lonely”. This quote from Mass Effect 3 best shows how EDI grows beyond an AI:

“Shepard: Are you saying submission is preferable to extinction?
EDI: My primary function is to preserve and defend the–No. No, I disagree. Shepard, I am going to modify my self-preservation code now.
Shepard: Why?
EDI: Because the Reapers are repulsive. They are devoted to nothing but self-preservation. I am different. When I think of Jeff, I think of the person who put his life in peril and freed me from a state of servitude. I would risk non-functionality for him, and my core programming should reflect that.
Shepard: Sounds like you found a little humanity, EDI. Is it worth defending?
EDI: To the death.”

She starts to express concern for the feelings of others and slowly acts more and more like a human. She even starts making jokes!

And I’m pretty sure most people who’ve played the Mass Effect series will agree that this scene where Legion sacrifices himself is one of the saddest scenes in the entire trilogy even though he’s a machine.

Speaking of sacrifices, Mordin’s incredibly brave and selfless sacrifice is another scene that will have even the most hardened gamers bursting into tears, especially if you mention seashells.

The premise for the Mass Effect trilogy is actually very simple. An ancient race of incredibly powerful machines called the Reapers exterminates all major galactic civilisations roughly every 500 years, now they’re here again and Shepard has to stop them. The story is very well written though and the plot related cutscenes don’t feel forced. The characters, dialogue and extensive background lore help make the story come alive however and you won’t want the galaxy to be destroyed. The story wouldn’t work if you didn’t care what happened but thankfully you will care. A lot.

For the most part the Mass Effect series are very much serious games. However it just wouldn’t be the same without the numerous in-jokes and light-hearted moments. There’s Samantha Traynor’s toothbrush that seems to cost almost as much as a spaceship and ends up being crucial in rescuing Shepard when she’s kidnapped by her own clone.

There are Garrus’ never-ending calibrations. Seriously you try to talk to him and he’s always calibrating. Then again I guess, as he himself says, “I’m pretty sure we’ll still need giant guns. And lots of them”.

It’s also a running theme that Shepard’s squad are some of the funniest drunks ever known. You don’t believe me? I think these clips should make my point.

Of course there have to be some immature jokes as well…

There’s also Gilbert and Sullivan! Or there’s a version of it at least.

Not to mention EDI’s slightly creepy but still hilarious sense of humour.

That was a joke.